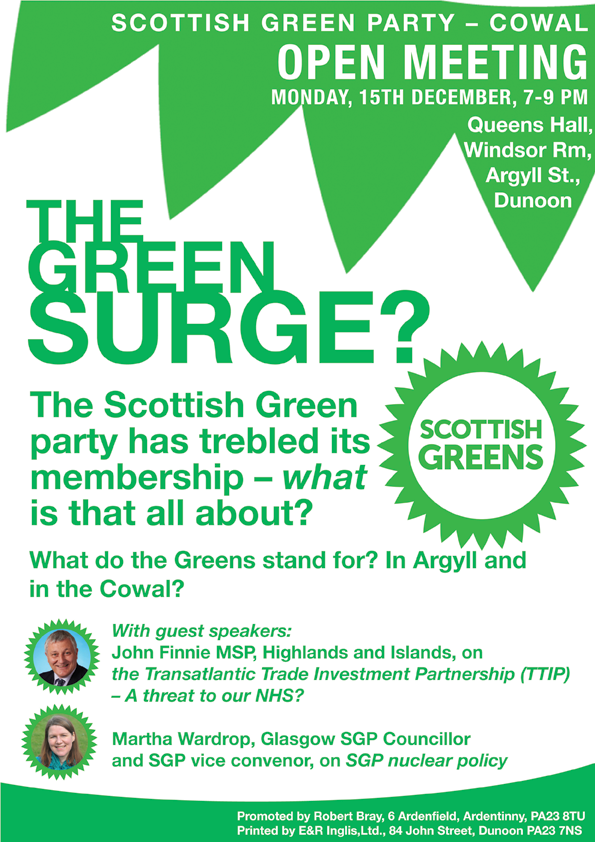 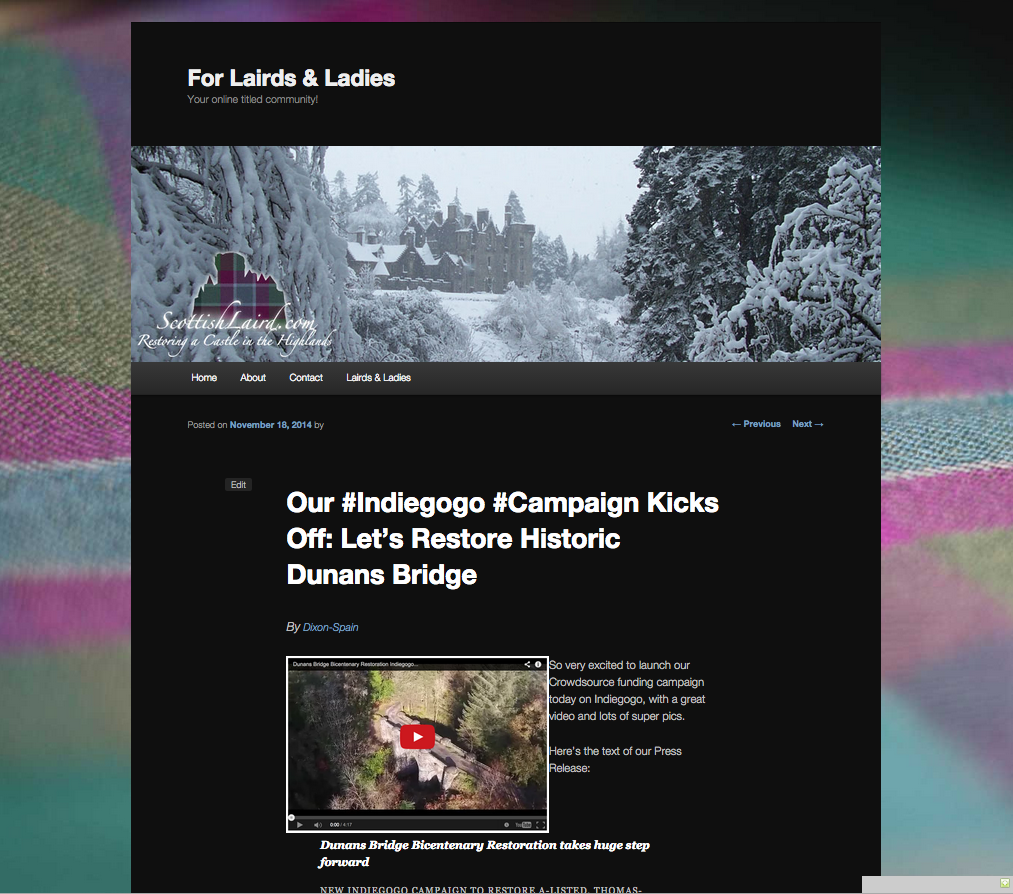 We’ve just implemented some long overdue changes to the Lairds’ and Ladies’ website, and more are on the way.

We’ve changed the look, creating a website that uses the same template as the ScottishLaird.com website, but darker (to distinguish it). This is Desktop, tablet and mobile friendly. We’re still working on this, so treat it as a draft …

The next part of the revamp is to include some exclusive content. Our plan is to publish the pdfs and documents that the renovation and refurbishment of Castle and Bridge has occasioned. Much of this you’ll have seen in abbreviated form via newsletters and blog posts here, but this is the full detail.

We’re also getting ready to welcome our new Lairds and Ladies of Dunans Bridge from our ongoing IndieGoGo campaign, as well as trying to streamline our email registration process… 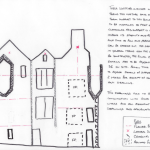 This last week, the team behind the castle renovation, particularly Robin Kent Architecture and Conservation has issued the tender for the clearance and consolidation of the castle. This is an essential pre-requisite for the final design on the castle itself, as well as laying the groundwork for the renovation as well. We’re delighted to have reached this stage.

We’ve included the full tender document below (for those who are interested), as well as some of the indicative drawings, showing the type of interventions our Structural Engineer, Steve Ward of David Narro Associated has in mind.

The tender is here. 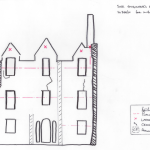 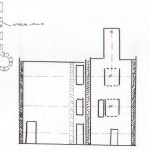 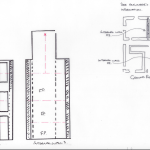 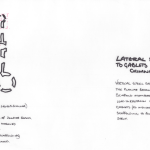 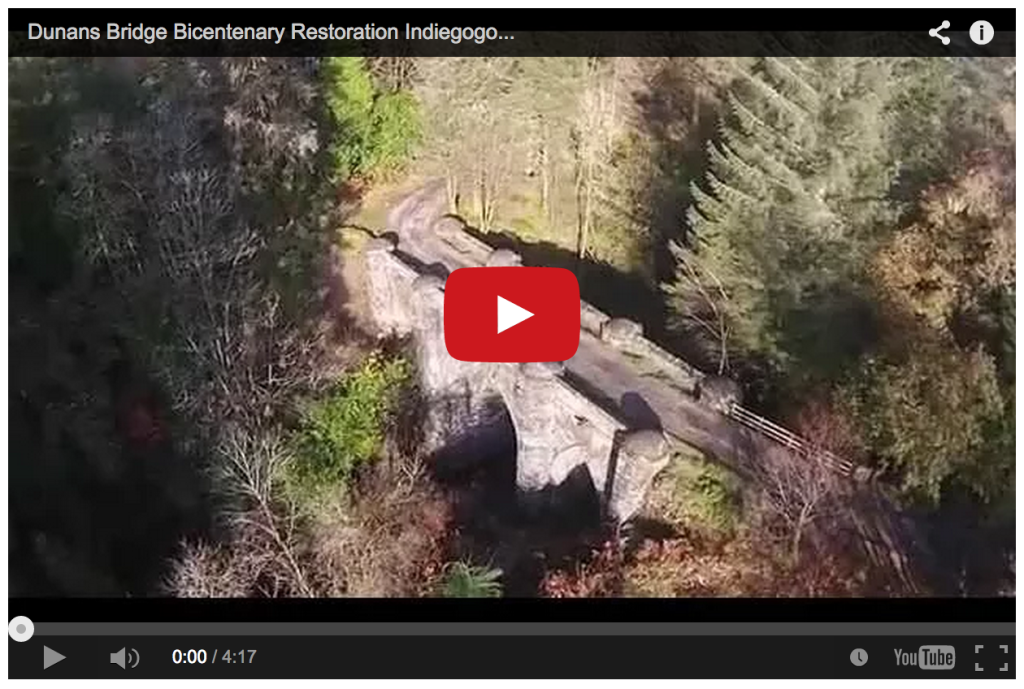 So very excited to launch our Crowdsource funding campaign today on Indiegogo, with a great video and lots of super pics.

Here’s the text of our Press Release:

Today sees the launch of a crowdfund campaign to accelerate the restoration of one of Argyll’s architectural jewels, the 16m (45ft) high Dunans Bridge in Glendaruel, Cowal. The bridge which gives access to B-Listed Dunans Castle and crosses Argyll’s-own “Grand Canyon”, the Chaol Ghleann gorge, is in need of serious repair, and is the first stage in the recently published Conservation Plan for Dunans written by eminent conservation architect Robin Kent, which culminates in the restoration of B-listed Dunans Castle in 2019 into a public building with Visitor Centre, Event space and Lairds’ and Ladies’ accommodation.

Over the last six months the team at Dunans has been working through the preliminaries to get the restoration of the bridge going, including producing drawings, defining specifications, undertaking investigatory works and clearing vegetation. The bridge is now ready for the works, and these works need to happen urgently.

As Charles says, “We’re hoping to gift the bridge the best 200th birthday present it could possibly get – a complete restoration. Sadie and myself are very excited to think that in 8 or 9 months time, the bridge’s future will be assured and we can celebrate our achievement with a huge Bridge Birthday celebration!”

Grant-funding applications are being made for this project by the Dunans Charitable Trust to Historic Scotland and the Heritage Lottery Fund, but because funding streams are never certain, Charles and Sadie Dixon-Spain decided that an Indiegogo campaign would be the ideal way of raising the profile of the bridge and also raising funds for the restoration and events programme that will be delivered alongside the works.

Culminating in a Bridge party in late summer 2015, the works will last between 6 and 8 months, and restore the bridge to a pristine state in its bicentenary year. The 200th anniversary of Thomas Telford completing the bridge is worth celebrating in itself, and preparing the bridge for a further 200 years of service is a fitting gift to the structure.

The IndieGogo campaign will also mark the first and only time that the title Laird or Lady of Dunans Bridge will be available. As a perk of contributing to the campaign, the title, and sundry other benefits, like scarves, ties and personalised email addresses, will be augmented with a permanent record of the names of Contributors, online, by the Bridge and, once restored, inside the castle too.

The page for our Indiegogo campaign is http://igg.me/at/dunans-bridge

Charles and Sadie, along with the team at Dunans, have been working tirelessly over the last few years, particularly since the beginning of the Scottishlaird Project in December 2007 to restore Castle and Bridge. With over 120,000 Lairds and Ladies now supporting the project, and providing over 5,000 visits* to the site in 2014 alone, this campaign has every chance of reaching its target of £411,600 as well as making a significant and lasting contribution to the local and regional economy.

*VisitScotland figures show that these 5,000 visits are worth a total of £2M to the local economy, with visits to Dunans being the primary motivation behind the visitors trip to Argyll (from within the UK) and Scotland (for our international Lairds and Ladies)

In time for the festive season, the team at ScottishLaird have decided to thank all those folk who follow us via Social Media – on twitter, on Facebook, on Linkedin, through our blogs, with a 10% discount on selected items at our online store.

Our Slate, Stone, Marble, and Family packages all qualify, as do our delightful teddies (Clan Chief Charlie, Handsome Harry and Gorgeous Georgia). If you want to get more formal, the ties, bowties, cufflinks and cummerbunds get the discount as does our fabulous book, the Conservation Plan for Dunans, by our architect Robin Kent.

And how do you get the discount? Use the coupon code “FB14XMAS” at our online shop here.

Today we produced this iconic piece of graphic design (well, we think it is iconic), in the established house-style of ScottishLaird.com, to represent the work on the Bridge, as well as encapsulate our intention to restore the bridge during its bicentenary year. This is preparatory to further grant fund applications, as well as something very exciting we are working on at the moment. Suffice to say there’ll be more news shortly.

Today we produced this iconic piece of graphic design (well, we think it is iconic), in the established house-style of ScottishLaird.com, to represent the work on the Bridge, as well as encapsulate our intention to restore the bridge during its bicentenary year. This is preparatory to further grant fund applications, as well as something very exciting we are working on at the moment. Suffice to say there’ll be more news shortly. 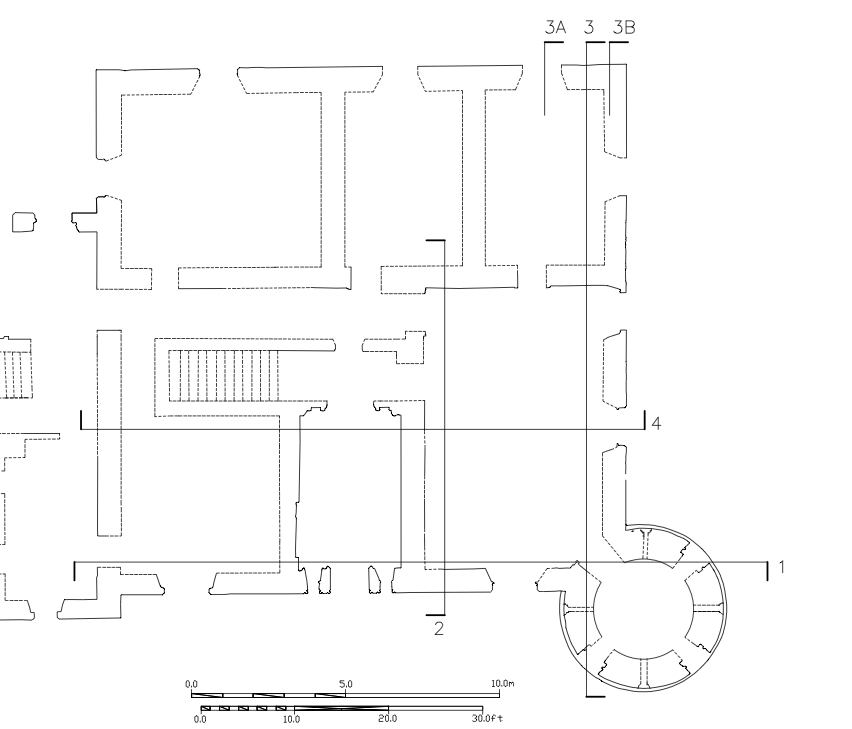 AOC’s laser survey has output some very interesting internal elevations of the castle. These will be used to begin the design work on the building over the next few months.

The featured image above is the preliminary specification for the clearance work which will have to be completed before detailed drawings are attempted.

We’re presently obtaining costs on this work, and will report back shortly on the revised programme.

This plan of the castle shows where the sections have been taken. The ends are squared off in the direction we’re looking at.

Elevation 1: View Northwest from behind the front facade, notice the main turret on the left. Elevation 2: View Northeast through the main apartment towards the old house showing the level of the detritus remaining to be cleared 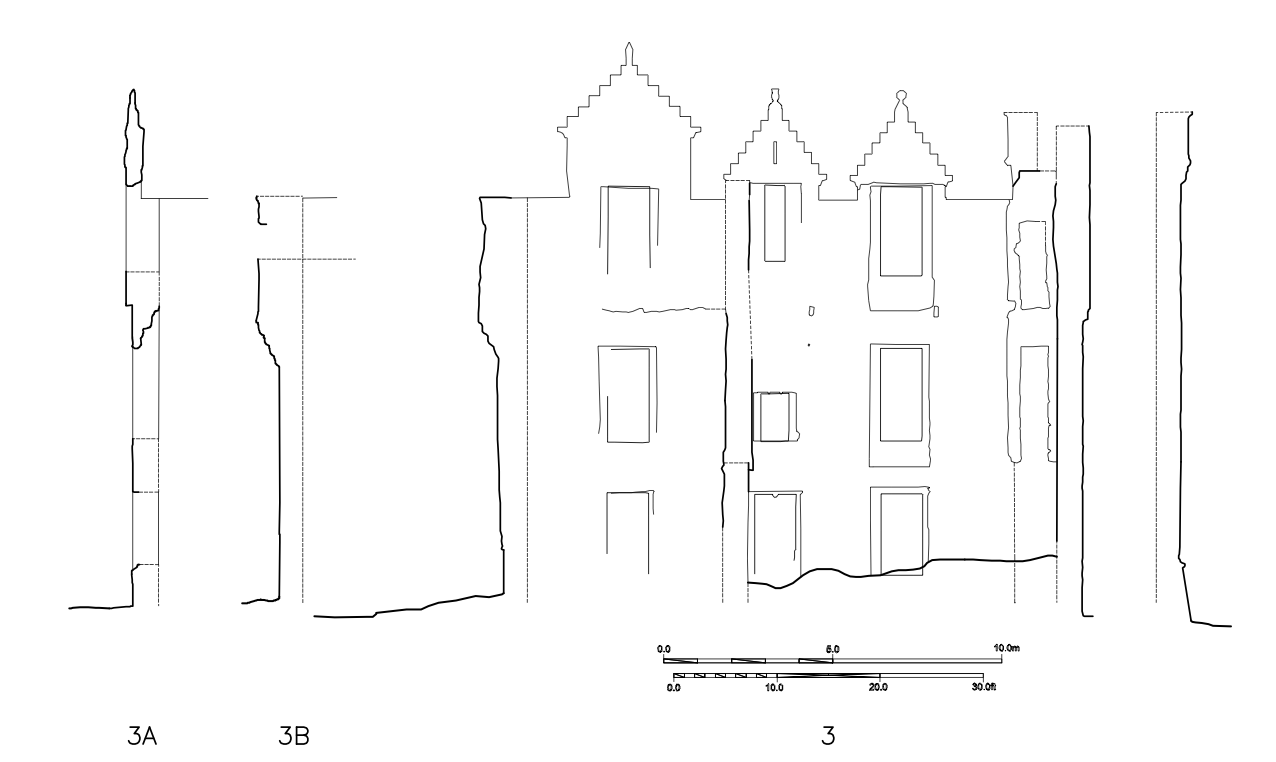 These multiple elevations, 3, 3A and 3B show the sort of detail we will need to specify the works. Also interesting here is the cross section of the main turret, on the right. 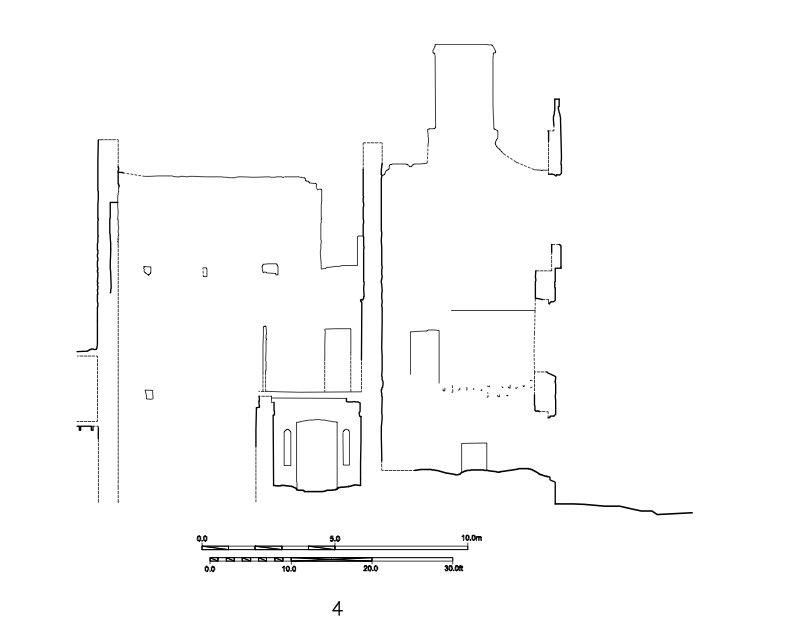 This fourth elevation shows the remains of the wall behind the facade, looking South-east, much of which is visible from the front door of the castle 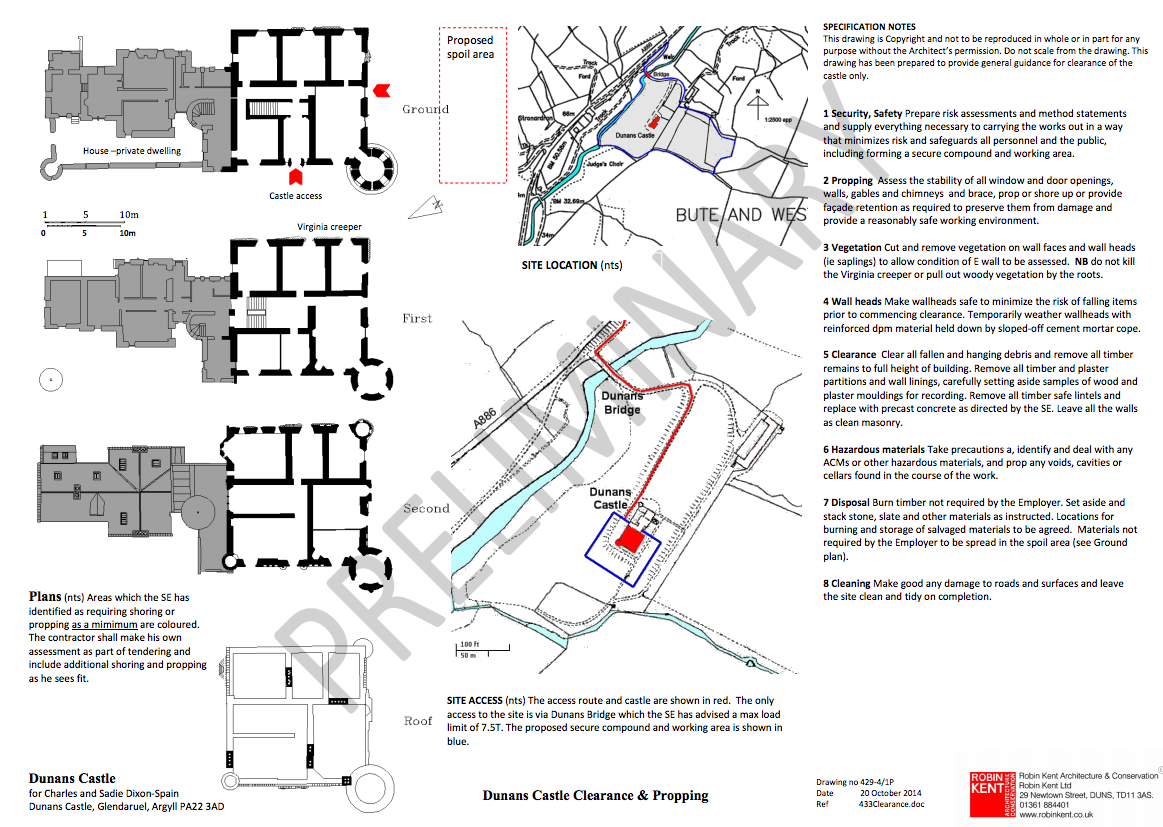 The full preliminary specification for clearance